How we passionately maintain organic cultivation

We started proper organic cultivation around the 50th year of the Showa era (1975).

Before that, we were using regular cultivation methods, which required agricultural chemical spraying 7 to 8 times a year and took 2 full days, a procedure that has terrible effects on workers' health.

In Showa 47 (1972), the current president (Yoshiyuki) fell ill due to chemical poisoning while he was spraying pesticide on a hot summer day and his doctor told him that if he kept handling agricultural chemicals on hot days like that for over time he would eventually cause sever damage to his liver. Because of this he started to consider organic farming and finally made the momentous decision to move toward an organic plantation. In the beginning, harvests were reduced significantly and he wondered if he had made the right decision, but when he thought about the people who consumed our tea and the health of his employees, he was reassured that organic was the only way to go. The business had several tough years, but after many trials and failures the tea trees became stronger and tea harvests became greater and greater.

Organic farming requires tremendous amounts of weeding, especially during the summer months, but we are very proud of ourselves for being able to offer our very healthy and safe teas for our customers. In addition to this of course we are happy to report that the president can enjoy an evening drink with his quite healthy liver.

Organic farming requires tremendous amounts of weeding, especially during the summer months, but we are very proud of ourselves for being able to offer our very healthy and safe teas for our customers. In addition to this of course we are happy to report that the president can enjoy an evening drink with his quite healthy liver. 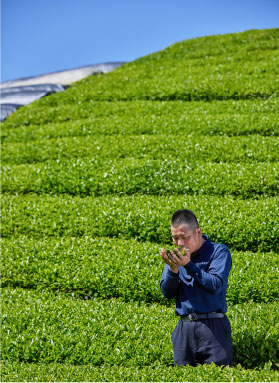 Organic JAS System (About each organization)

In Japan before Heisei 13 (2001), there was no organic regulations, so phrases like "no chemicals used" or "organically grown" could be freely used without standards.

Eventually, the Ministry of Agriculture, Forestry and Fisheries of Japan followed other advanced countries' footsteps by officially regulating organic labels on agricultural products and established "Organic JAS System" to protect Japan and consumers. They set a standard of Organic JAS (Japanese Agricultural Standard) for organic agricultural products and organic processed foods and only products that meet these standards are allowed to be called "organically grown" and carry Organic JAS certification. Since tea leaves can't be washed like vegetables or fruit, this standard means producing our organic tea requires considerable effort in order to provide safe and healthy tea to all of our customers.

About the exportation and process of the JAS system
achieving equivalence with Western organic systems.

Our company acquired certification for Europe through the organization called ICEA, an Italian organic certification association and had already started exporting tea to Europe in Heisei 21(2009). Around the same time, the Ministry of Agriculture, Forestry and Fisheries of Japan was trying to improve the JAS system to meet European standards. In the summer of 2009, people from JAS and EU visited our Aracha (crude tea) factory and plantation. After checking the condition of our site as a factory having both JAS and EU certification, EU officials decided to recognize JAS as an equally valid organic system.

We are very happy that we could be a part of process of the globalization of the Japanese organic system.

We have to inspect each tea farm and clear conditions, such as "no agricultural chemical or artificial fertilizer for 3 years", as well as record the procedures for each farm and the farming methods used for each farm. If an organic farm is surrounded by regular (chemically treated) farm, the chemicals could pollute the organic farm. Therefore, there has to be a space between organic farms and regular farms. If such land is used to grow tea, tea from that area can't be labeled as organic. We have 33 farming fields (as of Heisei 26/2014) for organic farming.

First of all, we apply (sending farming records for the past 3 years, plantation area records, related futility records, production schedule, etc.) to the Ministry of Agriculture, Forestry and Fisheries' registered private organizations. We have Japan Organic & Natural Foods Association (also known as JONA) as our inspector and they visit our site every year to check each farm, related facilities, used materials and used machines and also go through all procedure records, crude tea manufacture records, and products quality check records, making sure that we clear factory regulations and quality regulations in order to keep Organic JAS labels. We spend 3 days for this process to renew our certifications every year.

How we maintain the safety standard

We manage 6 hectares of our own plantation and we process our products in our factory on site. We also use contamination detectors and metal detectors to ensure safe quality. Moreover, we use product history records to create a traceability system and also inspect for agricultural chemical residue and radioactivity to produce safe green tea.

We have obtained the Food Safety Management System Standard

In order to increase the safety of our production, we will obtain JFS-B certification in April 2020.I did.
We will continue to make further efforts to produce safe and secure products in the future.